The Greensboro Arboretum began as a joint project of Greensboro Beautiful and the Greensboro Parks & Recreation Department to provide the community with an outstanding collection of plants for study and enjoyment. In the late 70’s, after completing Bicentennial Garden, Greensboro Beautiful was searching for another area to serve the community and attract visitors to Greensboro. The City of Greensboro offered 17 acres within Lindley Park – centrally located and easily accessible from all parts of the city by major thoroughfares. It was also the site of remnants of the Anniversary Garden, a project of the Greensboro Council of Garden Clubs in the 50’s. Greensboro Beautiful volunteer and Arboretum visionary, Irene McIver, proposed that special care be given to construct a landscape display garden which would utilize the natural topography of the site, which ranges from steep, almost cliff-like slopes to flat, meadow-like plains. She also suggested that the garden be constructed around existing wooded and open areas, and include collections of woody plants labeled for education, recreation and enjoyment of the public. 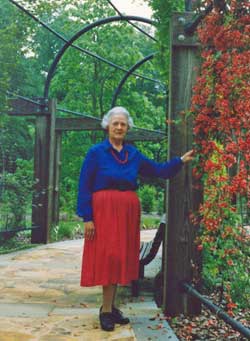 Greensboro Beautiful consulted with horticulture professors and NC State University, and contracted with Virginia Tech landscape architect and horticulture professor, Robert McDuffie, for a design and master plan. The plan involved woody ground covers, trees and shrubs to be grouped into labeled collection areas according to habit, family, color, growing conditions, and seasonal interest. Plant species selected were particularly hardy to the Piedmont Region of North Carolina. The plant material in each collection was separated by turf areas and paved walkways to allow close inspection of plants. 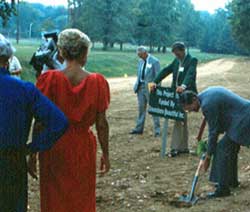 With the design in place and construction ready to begin, McIver began soliciting support from the community. Local businesses and nurseries were especially generous with contributions of plants and construction materials. Memorial and honor gifts were received and helped purchase trees and benches for the arboretum. City staff assumed responsibility for site preparation, installation of drainage, irrigation, planting, and maintenance. Construction began in 1986 and was completed in 1991.

In appreciation for her tireless dedication to the realization of the Greensboro Arboretum, Greensboro Beautiful named the Vine Collection in honor of Irene McIver.

The garden was formally opened to the public in 1991, and has proven to be a regional treasure – a living gallery of beauty, a learning laboratory for all ages, and a unique place for a tranquil walk.

Since that time, a number of special garden areas have been added for public education and wildlife habitat.

Back to Garden
×
Scroll to Top