In 1987, Dr. Joe Christian, a primary care physician for many years in Greensboro, was visiting the Bicentennial Garden when he noticed a large bass in the creek swimming downstream. He followed it across the street and found what he described as "a beautiful wilderness of swamp, creek, established trees, and what once had been a beautiful lake..."it is now in foul shape, dam broken, trash and weeds in the lake, beer cans, acres of briars, dead limbs..." 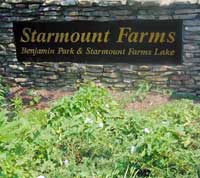 The property, a bird sanctuary, had been part of Starmount Farms since the early 1930s. It was near the home of Blanche Sternberger Benjamin, widow of Edward Benjamin, founder of Starmount Company and developer of the Starmount Forest neighborhood and the nearby Friendly Shopping Center. In 1987, Starmount Company was ready to develop the Starmount Farms subdivision. But the lake on the parcel had silted in and transformed the area upstream into a 15-acre wetland area. The lake and wetlands are fed by a creek that is a tributary of North Buffalo Creek. Through Starmount Company, Blanche Benjamin offered the land, lake and dam to the City of Greensboro after offering to rebuild the dam, renovate the lake to its original depth of 15-18 feet, and build a concrete sidewalk and observation deck on the property.

Over the next few years, Christian worked with City staff, numerous volunteers and local nurseries to develop plans, clear paths and weeds, and acquire, rescue and install thousands of plants which would thrive on this property. Private funds were donated to construct bridges, stone steps to traverse the hillside, and an elevated winding walkway was constructed to provide access throughout the entire wetland and to border the lake.

In 2005, construction began on a 150-foot recirculating, man-made waterfall - the first waterfall in Greensboro. The Dr. Joe Christian Serenity Falls were dedicated in 2007. 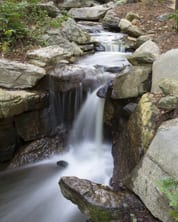 And in 2008, under the leadership of Dr. John Chandler, friends and patrons of the Bog Garden contributed funds to commission a bronze statue, in the likeness of "Dr. Joe", to honor his tireless efforts to develop the Bog Garden into the unique attraction it has become. The statue, created by Maria Kirby-Smith, is placed at the garden's entrance. 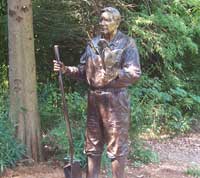 Back to Garden
×
Scroll to Top