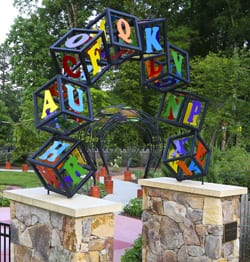 Award-winning sculptor, Jim Gallucci Jim works full time designing and fabricating sculpture in his Greensboro studio. Most of the works are commissions for public, corporate, and residential spaces around the country. His works also have been featured at the annual Pier Walk Sculpture Show in Chicago, the world’s largest outdoor sculpture show. the World Expo 88 in Brisbane, Australia, and the 7th Henry Moore Grand Prize Exhibition at the Utsukushi-ga-hara Open-Air Museum, Hakone, Japan. Jim’s most recent sculptures have utilized the element of doors and gateways. He says that, “gates have been found through out the history of Western Civilization as not only utilitarian architectural elements, but as symbols in art and literature”. After the terrorist attacks of Sept. 11, 2001, he included metal from the World Trade Center towers in a 50-ton, 53-foot-tall piece titled “The Gates,” a piece he says was intended to honor both the victims of the attack and the good that comes from evil. A number of Gallucci’s gates and arches embellish public areas throughout the United States.